With tensions between Iran, Israel, and Western powers reaching new highs over the Islamic Republic’s nuclear enrichment program, the tenth edition of the Munk Debates investigates how the world should respond to Iran’s nuclear ambitions.

For some, the case for a pre-emptive strike on Iran is ironclad. An Iranian bomb would flood the volatile Middle East with nuclear weapons and trap Israel in a state of perilous insecurity — along with much of the world’s oil supply. Others argue that a nuclear Iran could be the very stabilizing force that the region needs, as the threat of nuclear war makes conventional conflicts more risky. These same voices also ask: can the West and Israel afford to attack Iran when doing so could roll back the Arab Spring and re-entrench reactionary forces throughout the Middle East?

For the first time ever, this electrifying debate, which played to a sold-out audience, is now available in print, along with candid interviews with the debaters.

With tempers flaring between governments, the world’s oil supply in peril, and global security at risk, the Munk Debate on Iran tries to answer: Can the world tolerate an Iran with nuclear weapons? 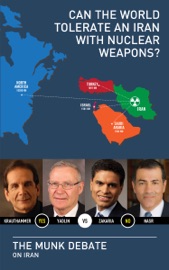