“China Syndrome is a fast-moving, truth-is-stranger-than-fiction thriller that doubles as an excellent primer of emerging infections for scientists and laypeople alike. But that’s not all. For readers more captivated by world politics than by microbiology, its chief strength, beyond the superb writing, is a detailed look at China’s culture of secrecy in the throes of a global public health crisis.”   — Los Angeles Times

When the SARS virus broke out in China in January 2003, Karl Taro Greenfeld was the editor of Time Asia in Hong Kong, just a few miles from the epicenter of the outbreak. After vague, initial reports of terrified Chinese boiling vinegar to "purify" the air, Greenfeld and his staff soon found themselves immersed in the story of a lifetime.

Deftly tracking a mysterious viral killer from the bedside of one of the first victims to China's overwhelmed hospital wards—from cutting-edge labs where researchers struggle to identify the virus to the war rooms at the World Health Organization headquarters in Geneva—China Syndrome takes readers on a gripping ride that blows through the Chinese government's effort to cover up the disease . . . and sounds a clarion call warning of a catastrophe to come: a great viral storm potentially more deadly than any respiratory disease since the influenza of 1918. 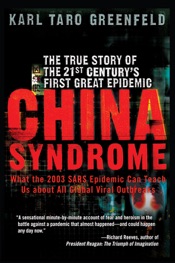