Welcome to the exciting world of forensic investigation—the science of solving crimes. This introduces the field of forensic anthropology, where scientists and criminal investigators use the human skeleton to solve some of the world's most mysterious and violent crimes. From the nineteenth-century murderer who boiled his wife in a vat of acid, to the modern-day pig farmer accused of murdering more than sixty women, forensic anthropology shows how even the tiniest fragments of bones can reveal the identities of victims as well as killers. From mass-transit accidents to war to genocide and terrorist attacks, this science also pieces together the most scattered and seemingly unidentifiable remains. Using recent finds such as bags of bones in the woods, or the five-thousand-year-old skeleton of a victim of foul play, forensic detectives use the smallest clues, revealing a massive crime-recording device: the human body. See how the dead do tell tales to those who know how to listen! 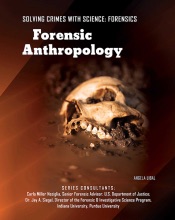